This August records the 10th anniversary of one of the 31 Brazilian graduate programs in the field of Materials: the Graduate Program in Materials Engineering and Science of the University of Caxias do Sul (PGMAT – UCS in Portuguese).

PGMAT-UCS history dates back to the year of 2003, when Israel Baumvol, physicist and researcher in the area of Materials, was invited by authorities of UCS to lead the creation of a graduate program in this field of knowledge. Baumvol was, at the time, retiring from his position as professor at the Brazilian Federal University of Rio Grande do Sul (UFRGS).

In August, 2004, after conducting a selection process that had 85 applicants for 15 vacancies, PGMAT-UCS started the activities of its Master’s Degree course under the coordination of professor Baumvol. The program then had some laboratories that already existed at the university and a few professors with PhD, and offered the only graduate course at the university in the area of Sciences and Engineering.

Nowadays, the program has more than 20 laboratories and an all its professors hold PhDs. Since 2012, PGMAT also offers a doctoral program, which currently has 19 students.

Another achievement of the program was the signing of an agreement with the European School of Engineers in Material Engineering (EEIGM, in the French acronym) for double degree. Two Masters have graduated with this double degree program after performing academic activities at UCS and EEIGM, headquartered in Nancy, France.

Regarding scientific production, more than 300 articles were published in international journals by faculty and students of the program in its 10 years of existence.

Impact of the research on the industry

From the beginning, the PGMAT-UCS team has pursued the interaction with local companies, based on the affinity that Science and Engineering of Materials have with almost all industrial segments. Thus, already in 2003, the UCS faculty involved in creating the program had visited companies of Caxias do Sul to appraise their needs.

On several occasions throughout its history, PGMAT-UCS could count on resources of companies and entities of the industrial sector, especially the Union of Metallurgical, Mechanics and Electric Equipment Industries of Caxias do Sul (SIMECS), which complemented the public funds in the purchase of equipment for the laboratories of the program.

In 10 years of existence, PGMAT-UCS has graduated 90 Masters. Among them, 45% work in local companies, 10% are academics and 30% are ongoing or concluded their Doctorate degree.

In some cases, the own Master’s research works were essential to the development of new products in the region. This was the case with the Celtrav®, a high-performance material to be used in springs and stops, which composes the product portfolio of the company Travi. A Masters research at PGMAT was also important in developing a coating for ornaments used by the footwear manufacturer Grendene. According to the company, about 18 million pairs of shoes with these ornaments were sold in 2013.

Young entrepreneurs who founded companies from works developed at PGMAT are also among the students and graduates of the program.  Plasmar Tecnologia, one of these spin-off companies, currently provides service for hundreds of industries in the region with plasma-based surface treatments that improve the performance and the cycle life of molds, matrices and other parts and components. The other example is Fineza, a company recently created, dedicated to manufacturing and commercializing products for housing and kitchen with decorative coatings that had been optimized in a PGMAT master’s thesis. 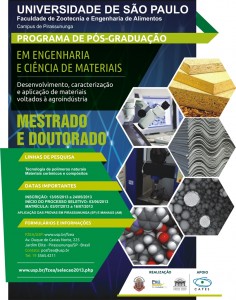