Professor Edgar Dutra Zanotto (DEMa – UFSCar), founding member of B-MRS, is one of two authors of the article selected by the American Ceramic Society to receive the Spriggs Phase Equilibrium Award of 2019. Entitled “Simple model for particle phase transformation kinetics,” the the award-winning article was published in the journal Acta Materialia in August 2018.

Since 2003, the award has distinguished the best contributions to the study of phase stability in ceramic-based systems among the works published in the calendar year prior to the award in the scientific literature (periodicals, books, bulletins, etc.).

The prize will be given on September 30 this year in Portland (USA) during the 121st ACerS Annual Meeting. 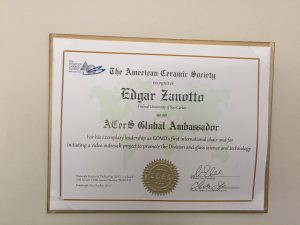 Edgar Dutra Zanotto, one of the founders of B-MRS, was awarded the title of “Global Ambassador” by the American Ceramic Society (ACerS). Zanotto is a Professor of the Department of Materials Engineering (DEMa) at the Brazilian Federal University of São Carlos (UFSCar). ACerS is one of the most important and traditional scientific societies in the field of Materials Science and Engineering and will complete its centenary next year. The title of “Global Ambassador” recognizes researchers who demonstrate leadership and exceptional service to the worldwide ceramic and glass research community.

On the occasion of the ceremony, held in Pittsburg (USA) in October of this year, Zanotto gave the prestigious lecture “Cooper Lecture” on “The ultimate fate of glass”.

A summary of the main subject of the talk can be seen in a 3-minute video:  Glass transition, a theatrical version.

Since the 1980s, The American Ceramic Society (ACerS) has selected and awarded publications on high temperature ceramics that have most contributed knowledge to the field and has honored them with the Alfred Allen Award.

There is no submission for this award, since the choice is based on queries in the journals indexed in the Web of Science, which are analyzed by a team of experts.

This year, in its 18th edition, the award was bestowed to an article published in the journal Ceramics International, authored by three researchers from the Brazilian Federal University of São Carlos (UFSCar), Professor Victor Carlos Pandolfelli and the researchers Ana Paula da Luz and Mariana Braulio, besides Analía Tomba Martinez, a researcher from the Research Institute of Materials Science and Technology (INTEMA), in Argentina. Victor C. Pandolfelli and Mariana Braulio had already received this award in two previous editions, and thus far they have been the only researchers to have been honored three times with the ACERS Alfred Allen Award since it has been created.

The award was received by the authors during the 53rd Annual Symposium on Ceramic Refractories, held in late March in St Louis (United States).

On this occasion, Professor Pandolfelli presented an invited lecture on high temperature ceramics inspired by nature.