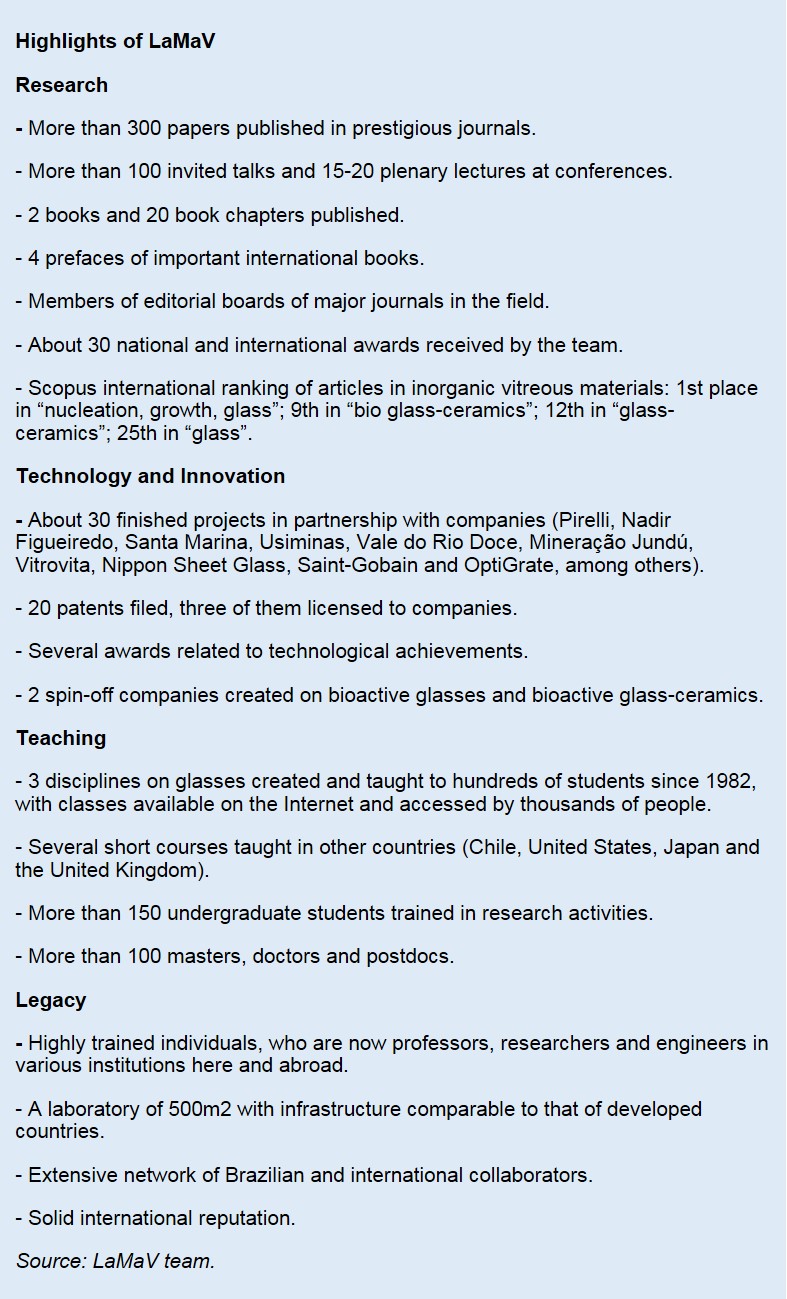 Applications for postdoctoral fellowships are invited for conducting fundamental and applied research at the Center for Research, Technology and Education in Vitreous Materials (CeRTEV) in São Carlos, Brazil. The period of the fellowship is two years, starting in August 2016, renewable for two additional years upon mutual consent.

The postdoctoral research will be focused on fundamental and/or applied investigation of glass and glass-ceramics. The researcher is expected to conduct the post-doc activities in one of the joint CeRTEV laboratories and supervised by one of our Principal Investigators, but in close collaboration with the other CeRTEV researchers.

Applicants should have a PhD degree in Physics, Chemistry, Materials Science or Engineering, and have a genuine interest in conducting interdisciplinary research in an international environment. Previous experience in glass science, solid state physics or chemistry is advantageous. The monthly fellowships (non-taxable) include ca. R$ 6.800,-plus 15% professional expenses. Travel expenses from and to their home countries will also be covered. The three sister universities are committed to increasing the proportion of women and ethnic minorities in academia.

Please send your application including CV, list of publications, a 2-page research proposal, and the names and email addresses of two references by May 5, 2016 to Prof. Dr. Edgar D. Zanotto (dedz@ufscar.br) and Laurie Leal (laurie_leal@yahoo.com.br).

Applications for postdoctoral fellowships are invited for conducting fundamental or applied research at the Center for Research, Technology and Education in Vitreous Materials (CeRTEV) in São Carlos, Brazil.

The period of the fellowships is two years, starting in January 2015, renewable for two additional years upon mutual consent.

CeRTEV is an 11-year, approximately USD$22 million joint effort of the Federal University at São Carlos (UFSCar), the University of São Paulo
(USP) and the State University of São Paulo (UNESP), to conduct fundamental and applied research in the area of Functional Glasses and Glass-Ceramics. The center comprises 14 faculty members, including some of the world experts in vitreous materials and structural characterization techniques. Research will focus on new glasses and glass-ceramics and the development of structure/crystallization/properties correlations (mechanical, optical, electrical, catalytic, biological) for technological applications.

Applicants should have a PhD degree in Physics, Chemistry, Materials Science or Engineering, and have a genuine interest in conducting interdisciplinary research in an international environment. Previous experience in glass science, solid state physics or chemistry is advantageous. The monthly fellowships (non-taxable) include ca. R$ 6.000,-
plus 15% professional expenses. Travel expenses from and to their home countries will also be covered. The three sister universities are equal opportunity employers and are committed to increasing the proportion of women and ethnic minorities in academia.

Please send your application including CV, list of publications, a 2-3 page research proposal, and the names and email addresses of two references by October 15, 2014 to Prof. Edgar D. Zanotto (dedz@ufscar.br).