Photonic crystals are nanostructures capable of manipulating visible light and other forms of electromagnetic radiation by organizing its structure in periodic patterns.

In addition to the natural materials with these characteristics, such as opal, photonic crystals are man-made and are generally classified as metamaterials. Its characteristics (shape, size and composition) are designed to control light waves. Through nanofabrication processes these become tangible structures and are used in many “nanophotonic” devices. Nevertheless, producing these structures is by no means a simple task.

With a study based on computer simulations, a team of Brazilian scientists headed by researchers from the Polytechnic School of the University of São Paulo (EPUSP) presented scientific contributions that can be used to improve the production of photonic crystals to enhance their performance of manipulating light. According to Emerson Melo, the first author of a paper on the study that was recently published in the prestigious Journal of Applied Physics (JAP) “the work presents a detailed analysis of the effects caused by nanofabrication processes on the optical properties of planar photonic crystals produced on silicon dioxide-cladding aluminum nitride”.

“The idea emerged from the opportunity of combining the excellent optical and physical characteristics of aluminum nitride (AlN), such as transparency over a wide wavelength range (from the near infrared to the ultraviolet range), its non-linear effects, great stability and temperature variations, with the advantages provided by photonic crystals, such as the construction of high-efficiency waveguides, curves and resonant cavities in nanoscale dimensions, in addition to the various optical effects of photonic crystals, such as very low group velocity and low-intensity nonlinear effects of the materials”, adds Emerson,  who is a doctoral student in Microelectronics – Photonics in EPUSP, within the Group of New materials and Devices of the Microelectronics Laboratory of the Department of Electronic Systems Engineering. Emerson`s doctoral research, whose advisor is Professor Marco Isaías Alayo Chávez, enquires into the study, production and characterization of nanophotonic devices such as waveguides, resonant cavities, optical modulators and switches in aluminum nitride photonic crystals.

The study that resulted in the paper published in the JAP began with an experimental stage. Thin films of aluminum nitride and silicon dioxide (SiO2) were manufactured by the EPUSP group, and with the research collaboration from UFMG and UNESP they were analyzed by the Variable Angle Spectroscopic Ellipsometry (VASE) technique to determine the dielectric functions, which was later used as the theoretical research data.

Then, the EPUSP group designed a photonic crystal, ideal in terms of performance and manufacturing possibilities, consisting of a layer of aluminum nitride between two silicon dioxide layers, with round holes arranged in a repeating pattern along the “sandwich” material. Using analytical and numerical methods, the USP researchers simulated some of the “side effects” of the photonic crystal manufacturing processes of this type (e.g., variations of size and location of holes) and theoretically analyzed how these imperfections affect the performance of the photonic crystal.

The theoretical research of Emerson and the other researchers of EPUSP focused on the imperfections generated in the two main stages of the nanofabrication process normally used in photonic crystals such as the one studied: electron-beam lithography and plasma-assisted dry etching. “The results presented allow to assess that the electron-beam lithography process has greater effect on the performance of devices that explore the dispersion of electromagnetic radiation through the photonic crystal, such as prisms, optical switches and modulators”, says Emerson. “However, the quality of the dry etching process has a more profound impact on the characteristics of devices into which linear or exact defects are introduced in the periodic network of the photonic crystal to insert harmonic modes within the photonic band gap. In this case, the dry etching has to be extremely well controlled for manufacturing the devices where waveguides and resonant cavities are among its main elements”.

In addition to making headway in understanding the role of nanofabrication processes of photonic crystals in the performance of nanophotonic devices, the authors of the paper were able to define a method to design planar photonic crystals with core and cover in thin film dielectric materials. “The methodology includes determining the dielectric function of the material by the spectroscopic ellipsometry technique to analyze the dispersion effects of the materials,  determining the geometrical parameters that maximize the photonic band gap and the analysis of the impacts caused by deviations introduced in the manufacturing process”, explains Emerson.

The research received financial support from the National Council for Scientific and Technological Development (CNPq) and from the Financier of Studies and Projects (Finep).

The authors of the article. From left to right, at the laboratory:.

Clarifying the processing of germanium for applications in micro and nanoelectronics

Germanium (Ge) is one of the semiconductor materials listed as possible alternatives to silicon for applications in the micro and nanoelectronics industry. However, the processing of materials based in germanium, aiming to optimize its electric properties for these applications is still presented as a challenge to the science.

In this context, a research team from the Federal University of Rio Grande do Sul (UFRGS) investigated the heat treatment (annealing) of germanium structures in deuterium atmosphere (hydrogen isotope which allows the use of analytical techniques specified  for its quantification). The results of the study were recently published in the renowned periodical Applied Physics Letters (APL).

The study which the cited article derived from is part of the PhD research, in progress, by Nicolau Molina Bom, supervised by Professor Claudio Radtke in the framework of the postgraduate program in Microelectronics from UFRGS. “This work came up as a sequency of studies developed during my Masters, involving systems of aluminium oxide on germanium (Al2O3/Ge)”, Nicolau reports.

In the Masters’ research, also supervised by Radtke, Bom observed that the deposition of dielectric materials on germanium substrates, as well as its processing by means of heat treatment, induces the semiconductor oxidation and the formation of zirconium dioxide (GeO2). Due to reactions that occur between the oxide that is formed and the germanium substrate, the structure causes physical and chemical changes which bring about the degradation of its electric properties. “Thus, it became clear that the understanding of these mechanisms was fundamental to the use of germanium in industrial applications”, says Bom.

Authors assigned this effect to the occupation by hydrogen atoms of oxygen vacancies (points of crystalline network in which there are “vacancies” in the place of atoms that would be expected to be there), brought about during the heat treatment, in the interior of the germanium dioxide and  in the GeO2/Ge interface.

Another effect observed by scientists was the oxide layer volatilization, mainly at temperatures superior to 450 oC, leading to changes in the chemical structure of the remaining oxide layer. 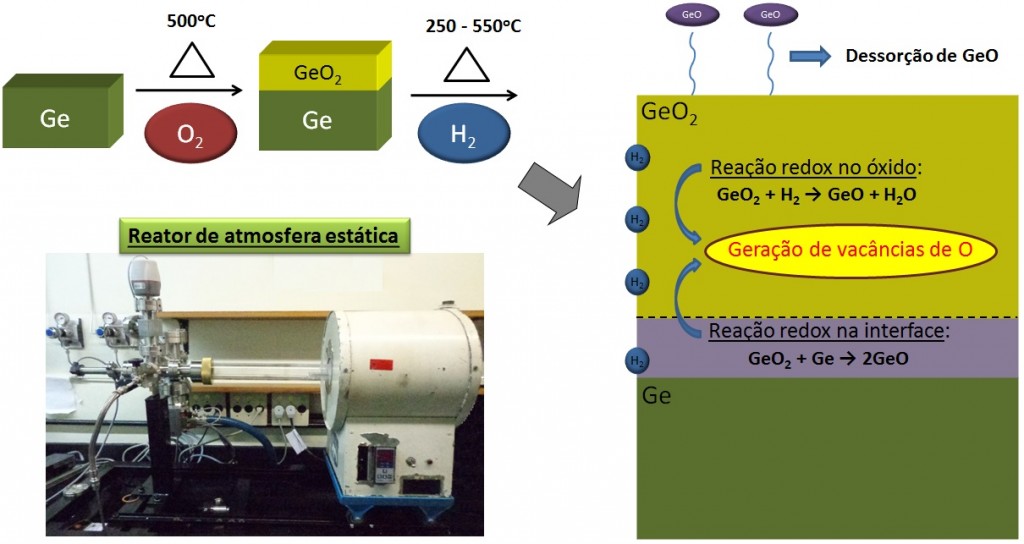 Schematic representation of the main results of the article, sent by Nicolau Bom.

“The greatest merit of our study consists in clarifying the physical and chemical process involved in the incorporation of hydrogen in GeO2/Ge structures”, evaluates Nicolau Bom, who is the corresponding author of the article. “Besides, the understanding of these interactions will have a key role in the choice of the appropriate processing parameters in industrial applications involving germanium”, adds him.

In fact, results of this study can be applied, for example, in the development of metal oxide semiconductor field-effect transistors (MOSFET) based in germanium structures. “The MOSFET is the “flagship” of the micro/nanoelectronics industry and is a reference for the Moore’s law”remarks Bom. However, according to the PhD Candidate, the results presented in the cited article can also be useful in manufacturing devices with innovative architectures, such as the quantum well field-effect transistor (QWFET). “The high performance presented by QWFETs – due to the high mobilities obtained by the quantum confinement – set this device as a promising alternative to overcome the physical limitations of the conventional MOSFETs”, states Bom.

The study that the APL article derived from was funded by the INCT Namitec, INCT of Surface Engineering, CNPq, CAPES and FAPERGS.

The APL article inserts itself in a greater context of research, in the group of “Physical-chemistry of solid surfaces and interfaces” (FQSSI) at UFRGS. The central idea that guides this work is to understand the physical-chemical mechanisms involved in alternative materials to the classic structure SiO2/Si, in such a way to overcome the limitations of the silicon-based nanoelectronics . “In this context, the interdisciplinarity between physics, chemistry and engineering is a natural consequence of this work, where the knowledge derived from the different fields of study complement each other in the investigation of these systems”, remarks him.

Besides the studies about germanium, the group counts on works developed around dielectrics which door has high dielectric constant (the so-called high-k), SiC (material oriented to applications in extreme conditions of temperature, voltage and frequency) and graphene.