Because it increases the speed and selectivity of many industrial processes involving chemical reactions, catalysis has been a major industry ally. However, deep understanding of catalysis still presents challenges to science.

In September, the charming city of Gramado (south of Brazil) will receive an expert on the subject, Hans-Joachim Freund (h index: 97, Google Scholar). Freund is the director of the Fritz-Haber-Institut der Max-Planck-Gesellschaft (Berlin, Germany), a research institute founded in 1911 and currently focused on surface and interface science. In this institution, Freund also heads the Department of Physical Chemistry, where more than 40 researchers are engaged in the study of heterogeneous catalysis, which happens when the phase of the catalyst differs from that of the reactants (for example, in a system of catalytic nanoparticles and gaseous reactants).

Hans-Joachim Freund was born in 1951 in Solingen (Germany). His parents had a small cutlery business (typical activity of this town) and always encouraged him to study. He graduated in Chemistry and Physics from the Universität zu Köln (Cologne, Germany) and, in 1978, obtained his PhD diploma from the same university. He did post-doctoral research at the Department of Physics at the University of Pennsylvania (United States) between 1979 and 1981. In 1983, he obtained his habilitation (degree that gives access to professorship in Germany) at the Universität zu Köln.

At the beginning of his academic career, he was an Associate Professor at the Universität Erlangen-Nürnberg (1983-1987). In 1987, he became a Professor at the Ruhr-Universität Bochum, where he remained until 1996, when he was hired by the Fritz-Haber-Institut der Max-Planck-Gesellschaft as a member and director. Throughout his career, he has been a visiting professor/ researcher at seven institutions in the United States, France, China and Japan.

He has received dozens of awards and distinctions from institutions in Europe and the United States. In particular, the relevance of his work in the field of catalysis was recognized through the Gabor A. Somorjai Award of the American Chemical Society (2007), the Karl-Ziegler-Prize of the German Chemical Association and Karl-Ziegler Foundation (2011), the Blaise Pascal Medal in Materials Sciences of the European Academy of Science (2012), the Gaede-Langmuir Award of the American Vacuum Society (2014), and the Michel Boudart Award of The North American Catalysis Society and the European Federation of Catalysis Societies (2015), among other prizes.

Currently, in addition to his activities at the Fritz-Haber-Institut der Max-Planck-Gesellschaft, he is honorary Professor in Physics and Chemistry at four universities in Germany, and Physics at the University of Birmingham in the United Kingdom.

He has educated more than 120 PhD students and given about 750 invited lectures. He is the author or co-author of more than 770 scientific articles published in indexed journals and some books, and has more than 38,000 citations, according to Google Scholar.

At the XVI B-MRS Meeting, Prof. Freund will talk about heterogeneous catalysis and, particularly, about the results he has obtained so far through the investigation of model systems.

SBPMat newsletter: – Please, briefly describe your main contributions to the study of catalysis.

Prof. Freund: – The department is dedicated to the study of model catalysts, applying a large number of techniques and instruments, some of which were newly developed within the department to investigate oxide surfaces and oxide metal interfaces. The group has pioneered the study of oxide supported nanoparticles at the atomic scale with respect to hydrogenation reactions using thin film preparation techniques, and has provided the first micro-calorimetric measurement of molecular adsorption energies as a function of size for model systems. Recently, charge control experiments on supported nano-particles on CO2 activation have provided detailed insight into active sites at the oxide-metal interface. Another direction of research in recent years has dealt with the first structure determination of an amorphous silica film at atomic resolution in UHV as well as in the liquid, which provides the basis for future model studies of heterogenized homogeneous catalysts prepared by bonding metal complexes to amorphous silica.

Prof. Freund: – Heterogeneous catalysts are complex multicomponent materials. Model systems may be designed starting from the most simple systems and increasing step wise complexity in order to identify the role the various components play in determining the chemistry. Using the tools of surface science this may be undertaken at the atomic level.

SBPMat newsletter: – Thinking about the applications, what impact would have, in your opinion, a deeper understanding of heterogeneous catalysis?

Prof. Freund: – The only way to finally be able to design heterogeneous catalysts from scratch is to achieve a deep understanding of the materials and its chemistry under operating conditions at the atomic level.

More information. Click on Hans-Joachim Freund‘s photo and see his bio and the abstract of his plenary lecture at the XVI B-MRS Meeting: http://sbpmat.org.br/16concontro/home/

Proposals of thematic symposia for the XVI B-MRS Meeting can be submitted to the Brazilian Materials Research Society (B-MRS) until January, 31. This year, the annual event of the B-MRS will be held from September 10 to 14, 2017 in the charming city of Gramado (state of Rio Grande do Sul, Brazil), in the FAURGS convention center.

Anyone with a doctoral degree, performing research in Brazil or abroad can submit a symposium proposal on a subject related to Materials Science and Technology. Proposals must be filled in online at http://www.sbpmat.org.br/proposed_symposium/. Title, scope and topics of the symposium, data about the organizers and preliminary list of invited speakers are required. The proposals will be evaluated by the B-MRS event committee and by the organizers of the meeting, and then submitted to the executive board of the society.

The B-MRS annual meeting is an interdisciplinary and international event dedicated to the presentation and discussion, in English, of scientific and technological advances achieved in the field of materials. In the last editions, the meeting has gathered about 2,000 participants from various points in Brazil and dozens of other countries.

Thematic symposia are axes of B-MRS meetings program. At the 2016 meeting, held in the city of Campinas, more than 2,000 papers were presented at 22 symposia, covering the discovery, fabrication, characterization and applications of various types of materials, such as nanostructured materials, biomaterials, electronic organic materials, electroceramics and nanocellulose, among many others.

The site of the event will be released and announced soon. 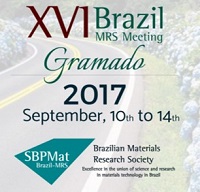 The call for symposia proposals for the XVI Brazilian MRS (B-MRS) Meeting is open until January, 31, 2017. The conference will take place in Gramado, RS at the Centro de Eventos de Gramado – Faurgs, from September 10th-14th, 2017.

Symposium proposals may be submitted by any PhD associated with educational and/or research institutions in Brazil or abroad, in any field of Materials Science and Engineering. The proposal presentation must be submitted through the form available at http://sbpmat.org.br/proposed_symposium/. The submission requires the following data:

We look forward to your participation to create an outstanding B-MRS Meeting!

The Brazilian Materials Research Society (SBPMat) is pleased to announce that the XVI Brazil-MRS Meeting will be held in the city of Gramado (State of Rio Grande do Sul, Brazil) from  10 to 14 of September, 2017.