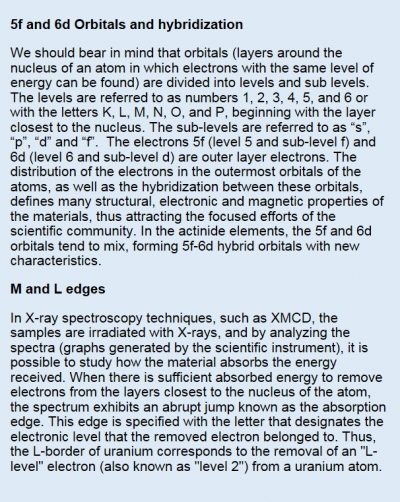 A team led by researchers from Brazil was able to unveil details of the distribution of electrons in materials based on actinide elements (the 15 chemical radioactive elements, with atomic numbers ranging from 89 to 103).

The group of scientists developed an experimental method that allowed a unique probing of the 5f and 6d orbitals and their hybridization in materials based on uranium (one of the most abundant actinide elements in the earth’s crust). This allowed the team to demonstrate, for example, that 5f-6d hybridization determines the magnetic properties of the studied materials. The work left as a legacy an experimental system for research on various magnetic materials (3d metals, rare earths, actinides and others), available to be used by the international scientific community at the Brazilian Synchrotron Light Laboratory (LNLS).

The study was reported in a paper that was recently published in Nature Communications (Impact Factor 12,124). “In this paper, we demonstrate the use of magnetic circular dichroism (XMCD) on the L-border of uranium to directly probe the 6d and 5f orbitals and also their degree of hybridization, rather than just probing the 5f orbitals as for instance the actinides M absorption edges,” details the corresponding author of the paper, Narcizo Marques de Souza Neto, professor at UNICAMP and researcher at LNLS.

In order to probe the orbitals of the uranium compounds, especially UCu2Si2 and UMn2Si2, the scientists had to overcome the difficulties of manipulating the materials due to their toxicity. They also had to make a series of adjustments in the high-energy XMCD technique to improve its sensitivity (to extend its detection limits).

These developments were initially performed at the LNLS DXAS line, dedicated to X-ray absorption techniques. Currently, the XMCD instrumentation is part of the XDS line of LNLS which is dedicated to X-ray diffraction and spectroscopy, where it is being used and improved. In the future the technique will be available in Sirius (the latest generation of synchrotron light source which is being built in Campinas), more precisely in the EMA line, which will be dedicated to X-ray techniques under extreme conditions of pressure and temperature. According to Souza-Neto, who coordinates both the XDS line and the EMA project, the conditions for studying actinides and similar materials by XMCD will be unparalleled in Sirius.

In addition to advancing the knowledge on actinides, the research demonstrated the potential of the XMCD technique improved by the Brazilian team to continue unveiling the characteristics of these still experimentally understudied elements. A deeper understanding of actinides, says Souza-Neto, is necessary to propose new uses for these elements, and also to be able to use them more efficiently in existing applications, such as, for example, power generation, diagnosis and treatment of diseases and the production of special glasses.

The history behind this work

The origin of this work dates back to 2009, when Souza-Neto was studying rare earth electronic structure and magnetism during his postdoctoral fellowship at the Argonne National Laboratory in the United States. “I had the idea of expanding the study of rare earths to actinide compounds (Souza-Neto et al., Phys. Rev. Lett., 102, 057206 (2009)) using XMCD to probe a charge transfer in the 4f and 5d orbitals”, the researcher reports. Looking for materials with similar characteristics, he came across uranium compounds. “We first tried to start this study in Argonne, but the conditions there to carry this out were not as we had hoped,” he adds. He returned to Brazil in 2010 as a researcher of CNPEM, with the desire to continue this initiative. Thus, in 2011, Souza-Neto began to guide the doctoral research of Ricardo Donizeth dos Reis on this subject together with the co-supervisor Flávio César Guimarães Gandra, a professor at Unicamp, with whom he had previously collaborated.

Samples of uranium compounds were prepared and characterized in the Laboratory of Metals and Alloys of Unicamp, coordinated by Professor Gandra, where there was already research experience on actinide and rare earth materials. The X-ray absorption spectroscopy experiments were performed at Argonne’s Advanced Photon Source and at LNLS. “All experiments on the L edges of uranium, which make up the main innovative contribution of this work, were carried out at LNLS,” Souza-Neto details. “At Argonne the experiments were carried out on the M edge of uranium to probe the contribution of the 5f orbitals separately and corroborate our interpretation of the results,” he adds. Furthermore, the Brazilian group had the participation of a researcher from France in the theoretical simulations performed for interpreting the data.

The research was carried out with financial resources from the São Paulo Research Foundation; from the Brazilian federal agency Capes; from the Ministry of Science, Technology and Innovation of Brazil, and from the Office of Science of the United States Department of Energy.