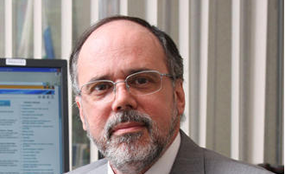 João Alziro Herz da Jornada was born on June 1, 1949 in São Borja (Rio Grande do Sul State, Brazil). Between 1968 and 1971, he studied Physics at the Federal University of Rio Grande do Sul (UFRGS), in the city of Porto Alegre. Shortly after receiving his bachelor’s degree, he started his master’s degree in Physics, also at UFRGS, which he completed in 1973. His master’s dissertation focused on one of the subjects which he would pursue throughout his scientific career, the effect of high pressures on materials.

In August of 1974, he assumed the position of assistant professor of the Physics Institute of UFRGS. From 1977 to 1979 he did a PhD in Science at UFRGS, where he developed new research on the effects of high pressures on materials, guided by Professor Fernando Claudio Zawislak. His doctoral thesis received praise from UFRGS. In 1983 and 1984, he carried out his postdoctoral studies at the National Institute of Standards and Technology (NIST), an institute dedicated to promoting innovation and industrial competitiveness through metrology, science and technology in the United States. In April 1985, he became a full professor at the Physics Institute of UFRGS, a position he held until his retirement in February 2016. Since then, he has been a guest contributor at this institution. Throughout his academic career at UFRGS, he held several management positions, including president of the university’s research chamber and coordinator of post-graduate programs at the Institute of Physics. Professor Jornada also created and coordinated the Laboratory of High Pressures and Advanced Materials of IF-UFRGS.

From 1993 to 2000, Jornada was the coordinator of the executive committee of the Rio Grande do Sul Metrology Network Association (RS Metrology Network), an entity created in 1992, acting in qualified metrology.

From 2000 to 2004, Jornada was director of scientific and industrial metrology at the National Institute of Metrology, Quality and Technology (Inmetro), a federal agency linked to the Ministry of Industry, created in 1973, whose mission is to strengthen national companies, increasing their productivity by adopting mechanisms aimed at improving the quality of products and services.

In December 2004, Professor Jornada assumed the presidency of Inmetro, remaining in the position for 11 years, until December 2015. During his mandate, Jornada promoted changes in the strategy, training, infrastructure and management of Inmetro, which led the institution to increase its national and international scientific recognition and to develop interactions with academia, companies and government.

Jornada received a series of honors, mainly from the Rio Grande do Sul Research Foundation (FAPERGS), from the Presidency of the Republic, Brazilian Air Force, Ministry of Foreign Affairs and Brazilian Navy. He has been a member of the Brazilian Academy of Sciences since 2001, and a fellow of TWAS (The World Academy of Sciences for the advancement of science in developing countries) since 2008. Since 2016, he has been a distinguished fellow of the Global Federation of Competitiveness Councils, a network of individuals and organizations involved in competitiveness strategies, based in Washington (USA).

The scientist is the author of about 100 papers published in scientific journals, including Science and Nature.

SBPMat Bulletin: Tell us what led you to become a scientist and, in particular, to work in the area of Condensed Matter Physics.

João A. Herz da Jornada: I had a great interest in science from a very early age. The environment in the late 1950s and early 1960s, during my childhood and adolescence, was especially stimulating for the scientific career, especially Physics.  There was so much emphasis in the press on topics that fascinated me, such as rockets, sputnik, space race, nuclear power, transistor, computers… It was a time when the world saw Science with extreme optimism and confidence, truly the “endless frontier”, in the words of Vannevar Bush. Science represented certainties, providing the sure way to answer all questions, large and small, a true, complete and unified worldview – perhaps the apex of the Enlightenment ideology. All this fascinated me. I have always enjoyed reading, learning, experimenting and building things involving Physics, Chemistry and Electronics, enjoying the pleasure of discovery and accomplishment. Therefore, following a scientific career was very natural. I graduated in Physics and did a masters and PhD in Experimental Physics, applying techniques of Nuclear Physics to problems of Condensed Matter Physics, under the guidance of Fernando Zawislak. At that time Condensed Matter Physics was emerging dynamically, there were plenty of interesting problems to tackle and also relevant demands for applications in various areas. My PhD work involved designing and building very high pressure chambers, requiring deeper knowledge about some materials properties; so I began to take interest beyond Condensed Matter Physics, entering into Materials Science. Moreover, I was enthusiastic about the potentialities of the Condensed Matter Physics technique, because it allows considerable and controllable variations of interatomic distances, determinants of properties of solids, besides generating phase transformations. As there was no expertise at all in high pressure in Brazil, I decided to create a Laboratory to develop the technique, implement good experimental infrastructure and explore its possibilities as a new research instrument in our surroundings. In fact, we set up a good laboratory, with different types of systems for producing high pressure, designed and built right here, enabling high-temperature and in-situ measurements using various probing techniques such as optical spectroscopy and x-ray diffraction. We were then able to develop several lines of research in Condensed Matter Physics. I am using the plural to emphasize teamwork with a fantastic team of students and collaborators. The mastery of this technique further increased my interest in Materials Science because it offered a new window of opportunity for the production of new materials, especially superhard materials such as diamond and its composites. The production of synthetic diamonds in our Laboratory undeniably led us to Materials Science, with some very representative research lines, such as diamond synthesis by high pressures and by CVD, production of compacts and composites of high hardness materials, production of diamond cutting tools and cBN, etc. Subsequently we started work on ceramic materials, involving both basic research and applied research, in association with companies to produce structural ceramics.

But there is also a factor I believe has influenced my career choice: both Condensed Matter Physics and Materials Science offer tremendous possibilities for innovations and wealth generation for society, our society that despite the difficulties, supports and pays for our work. I have a sense of duty, shared by many of my generation, in order to effectively help our Country’s development.

SBPMat Bulletin: What do you believe are your main contributions to the Materials area? We would like to ask you to go beyond listing the results and briefly describe the contributions you consider as the most relevant or most outstanding. In your response, we ask that you consider all aspects of scientific activity.

João A. Herz da Jornada: The answer is not easy, given the multiple dimensions of the question and the natural difficulty of speaking about one’s own deeds. I will comment briefly on some points. Firstly, the formation of people, in a varied spectrum of levels within the area of Materials: Doctors, Masters, undergraduate students and scientific initiation fellows. In fact, I believe the formation of quality human resources is the greatest contribution of basic research in a country like Brazil, still under development. I am very proud to have contributed to the scientific development of many people, in particular the many doctors I have helped who are now in important leadership positions. Another aspect that I consider relevant is with regard to the construction, together with dedicated students and collaborators, of the unique laboratory infrastructure in the area of high pressures and associated techniques, enabling many research works and also some that support the Industry. We implemented the high pressure technique in Brazil, building various types of equipment, and applied it in a wide range of scientific and technological works, including synthesizing diamonds and other advanced materials for the first time in the Country.

Like all Brazilian researchers, my scientific contributions, especially publications, are detailed in the Lattes Curriculum, but from a personal point of view I have been very pleased with some of the publications in high impact journals, such as Science, Nature, PRL and PR, which were the results of works entirely carried out in our Laboratory, with own ideas and with equipments largely constructed by us, often using scrap from old equipments. Another contribution to the Science of Materials was the creation of the Materials Laboratory at Inmetro, during my term as president of that institution. In addition to being an interesting scientific program and a very high-level team, the largest electronic microscopy infrastructure in the Southern Hemisphere was implemented, accessible to the entire scientific and technological community in the country. At UFRGS, I was one of the founders of the Postgraduate Program in Materials Science and of the Center for Microscopy and Microanalysis. I also highlight the construction of a network of international partnerships involving materials and high pressure studies.

SBPMat Bulletin: You will be honored at the XVI SBPMat/B-MRS Meeting with the “Joaquim da Costa Ribeiro” Memorial Lecture. Could you briefly comment on what you will discuss in this talk and/or leave an invitation to our readers.

João A. Herz da Jornada: I am honored by this recognition and invite the readers to the lecture; I will be very pleased to have the meaningful participation of our community. The theme will be the connection between Materials Science and Innovation, from a perspective not often discussed in Brazil, more specifically the complex mechanisms that generate economic and social impact from basic research.  I believe this theme is currently very relevant at a time of severe budgetary restrictions for Science in Brazil. It is important to have an in-depth understanding of the subject, using the same scientific approach we work with, based on evidence, good logic, rigor, critical thinking, open-mindedness and broad discussion. We will discuss the need to work with new concepts, such as the capacity for absorption, capacity for appropriation of knowledge and connectivity, to better understand the problem. We will see that Materials Science is a particularly important area, not only because the specific associated knowledge is very close to applications, but also because its multidisciplinary nature unavoidably involves a wide range of connections – one of the important factors of an innovative “ecosystem”.

SBPMat Bulletin: Please leave a message for the readers who are starting their scientific careers.

João A. Herz da Jornada: As a message to those who are beginning their career, I would like to suggest reflecting on a famous idea of the great Enlightenment philosopher, David Hume, who wrote this famous quote: “reason is, and ought only to be the slave of the passions”. What does it mean in the present context? Science is an essentially rational undertaking of the human spirit. It requires logic, intelligence, disciplined and rigorous work. But it also requires creativity, imagination, connection with people, dreams, and a lot of will power – primarily passion. Passion inspires us and mobilizes us for work, however, it is also nourished by the challenges and results of a beautiful work, and also nourished by the highly social and stimulating nature of the scientific environment. These two dimensions must also be recognized and properly cared for. Materials Science provides us with a huge range of beautiful challenges, constantly renewed by their own dynamics and by the demands for applications, which are always connecting us with society. It provides good chances of rewarding results, both scientific and technological. Its multidisciplinary nature, always requiring much interaction, gives us a rich and stimulating human experience.