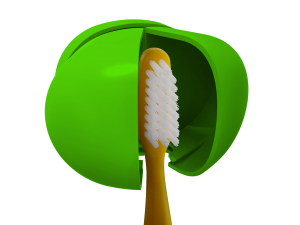 A research on the incorporation of silver with antibacterial properties on surfaces, conducted by the  Center for the Development of Functional Materials (CDMF in Portuguese), one of the Research, Innovation and Dissemination Centers of the São Paulo Research Foundation (FAPESP) is being applied to toothbrushes.

OralGift, a company with 12 years of experience in the oral hygiene business, in association with CDMF and NANOX Tecnologia, released a new line of products coated with the NanoxClean technology. Produced with silver nanostructures incorporated into the raw materials, the surface of the product is protected against microorganisms and bacteria.

The researchers responsible for this work explain that damp environments, mainly bathrooms, display a large amount of bacteria and fungi. When toothbrushes are left exposed, there is a high possibility of contamination.

The technology incorporating silver nanostructures eliminates 99% of the bacteria and fungi accumulated on  toothbrush and the cases used to keep them, as well as tongue cleaners.

The CDMF Director, Professor Eldon Longo, clarifies the importance of the association between the research developed at the university and the industrial-scale innovation made in companies:  “Nanox is a first world company in innovation, with high technology. It develops products based on nanotechnology, mainly to healthcare. This innovation, released on the market, is another example of creativity in transforming knowledge into wealth for the country”.

The Center for the Development of Functional Materials (CDMF) is one of the Research, Innovation and Dissemination Centers (CEPID in Portuguese) supported by FAPESP (São Paulo Research Foundation), and the National Institute of Science and Technology of Materials in Nanotechnology,  and counts with the collaboration of São Paulo State University (Unesp), Federal University of São Carlos (UFSCar), University of São Paulo, (USP) and the Nuclear and Energy Research Institute (Ipen).

NANOX Tecnologia is located in São Carlos city (Brazil), and was created from a project developed by three young UFSCar students, which they improved during their graduate studies in the Chemistry Institute of Unesp at the Araraquara campus.

The company was among the first ones engaged in the field of nanotechnology in Brazil, and is currently considered the largest in its business in the country, being the first national company to export nanotechnology.