At the end of January, 2014, the Brazilian community of Materials research celebrates an anniversary: the Materials Area of CAPES reaches its sixth year of existence. CAPES is the government agency linked to the Brazilian Ministry of Education in charge of promoting high standards for post-graduate courses in Brazil.

In fact, it was on January 30th, 2008, that CAPES’s published a press release announcing the introduction of changes to its table of areas. Such table lists the areas of knowledge and it is used in the evaluations of the post-graduation programs in Brazil. The changes disclosed in such note included the insertion of the Materials Area, which up until then did not exist, and which from then on would be a part of the Multi-disciplinary greater area, which had been recently created.

One day prior to such disclosure, an official letter from CAPES’s Evaluation Office had been sent to all coordinators of post-graduation programs previously identified as possibly being grouped into the new area. The official letter informed that a recent meeting of CAPES’s Superior Board had approved the creation of the new Materials area of evaluation, and also that physicist Lívio Amaral, a professor from the UFRGS (Federal University of the State of Rio Grande do Sul) had been appointed as the pro-tempore coordinator. In addition, the official letter asked the coordinators who deemed it to be in the interest of their programs to become connected to the new area of evaluation, to inform CAPES of their decision.

In September, 2012, professor Amaral had taken part in a meeting at the headquarters of CNPq (Brazilian Council for the Scientific and Technological Development) called by Professor Celso de Melo, who was a director in the council. The theme of the meeting was the Materials Science and Engineering area, and the Advisory Boards of such body. The other participants of the meeting were the professors Glória de Almeida Soares (from COPPE-UFRJ), Elson Longo (from UFSCar) and João Marcos Alcoforado Rebello (from COPPE-UFRJ).

A document signed by the participants of the meeting pointed some problems with the evaluation of research projects in the Materials Area. To sum it up, due to the fact that there was no Advisory Board for the Materials Area at that time, the projects and other requests pertaining to Materials Science or Engineering were often appraised with debatable parameters or sent from area to area until someone was found who could evaluate them, a situation which significantly increased the number of appeals received by the CNPq and the time to reply to the requesting researcher. To solve such issue, the document proposed initially the creation of a committee with representatives from the several areas of knowledge involving Materials and also that the scientific societies with any relation to Materials were to be called to the debate, to find a solution fully backed by the technical and scientific community.

“This matter of the inclusion of a Materials area in the government fostering agencies had been considered since the mid-90s”, Lívio Amaral states. “That occurred within the context of creation of a Brazilian Materials society, having the MRS as a reference, which ended up occurring in the early 00s. At the time, there was a lot of debate in several situations, such as in the Brazilian Meetings on Condensed Matter Physics of the Brazilian Physics Society”, he adds.

In parallel, professor Amaral had been following-up on that matter within CAPES, where he was the coordinator of the Physics and Astronomy Area. According to Amaral, by means of evaluations conducted every three years, it was possible to verify that several post-graduation programs, regardless of the names they had and by which of CAPES’s areas they were encompassed, were awarding master and doctorate degrees with intellectual production in Materials. “Since, in addition to being department coordinator, I also took part in CAPES’s Technical and Scientific Council, I had the opportunity to take that entire matter to debate in such Council”, the professor  comments.

At that time, Jorge Almeida Guimarães, who would become CAPES’s president in 2004, was the coordinator of the Biological Sciences II Area and, like professor Amaral, took part in the Technical and Scientific Council and was a professor in the UFRGS. “We discussed at length the need to create two new areas, the Materials and Biotechnology areas”, Lívio Amaral tells us.

In addition, Amaral recalls that another favorable coincidence then occurred. CAPES’s president at the time was Professor Abílio Afonso Baeta Neves, who had previously been the dean of post-graduation in UFRGS when the program of post-graduation in Materials Science had been submitted to the university, by initiative from professors of the Physics department, Amaral included, and of the Engineering and the Chemistry departments. “In summary, in that scenario, the discussion regarding new areas, inside and outside the Technical and Scientific Council, was very frequent due to such circumstances”, professor Amaral sums it up. 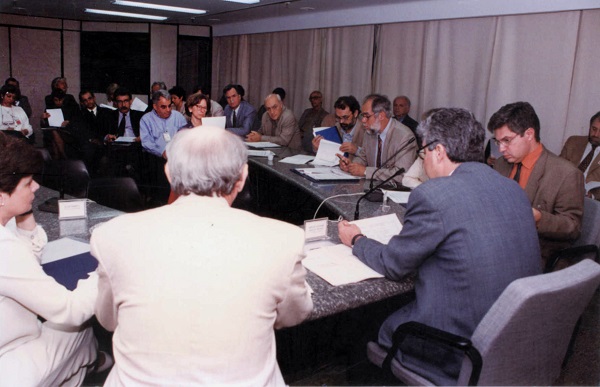 Meeting of CAPES’s Technical and Scientific Council, at the time of professor Abílio Baeta Neves’s presidency. At the table, the third one from the right is the president; the sixth, the one speaking, is professor Jorge Guimarães; the seventh is profesor Lívio Amaral. (Picture provided by Lívio Amaral)

The decision for the creation

According to Amaral, in July, 2007, CAPES held a meeting in Brasília, to consider the possible creation of a new area of knowledge, to be called “Materials”. Representatives from several post-graduation programs were invited, including professor Lívio, who was at the time the coordinator of UFRGS’s program.

The official letter-invitation sent by CAPES’s Evaluation Office contained: “The agency has been granted to such area the importance it deserves, considering the relevance of the creation of new materials for the current science and technology. CAPES’s Superior Council, in addition, has already authorized this Office to create the area at hand. For such decision, the meeting to be held in July 31st shall be decisive, for it will allow us to conclude if such innovative measure is in the interests of the programs – and of the Brazilian science and technologies. The new area would encompass all programs that – currently divided into different areas of knowledge – highlight this theme, which is a priority for the Country and for applied sciences”.

“The meeting was, therefore, conclusive for the creation of the new area and designed the initial milestones for the same”, Amaral states. Thus, on January 25th, 2008, CAPES’s Ordinance No. 09 was published, which ordinance, in its article 3, created two new areas of knowledge, “Materials” and “Biotechnology”, and designated their pro tempore coordinators.

List of post-graduation programs that adhered to the Materials area (as of March, 2008).

1. Program of Post-Graduation in Materials – UNIVERSIDADE DE CAXIAS DO SUL

2. Program of Post-Graduation in Materials Science – UNIVERSIDADE FEDERAL  DO RIO GRANDE DO SUL

3. Program of Post-Graduation in Materials Engineering and Science – UNIVERSIDADE FEDERAL DO CEARÁ

7. Program of Post-Graduation in Materials Engineering and Science – UNIVERSIDADE FEDERAL DO RIO GRANDE DO NORTE