Advances in understanding brain activity and in the diagnosis and treatment of neurological diseases such as epilepsy and Parkinson’s may arise with the help of Materials Science and Engineering. More precisely, of organic electronics.  In fact, organic materials with electronic properties are great interfaces between the signals sent by the brain and the outside, whether to study the brain or to interact with it.

The subject will be addressed in a plenary talk during the XIV SBPMat Meeting, given by Professor George Malliaras, head of the Department of Bioelectronics at the Ecole Nationale Supérieure des Mines de Saint-Étienne, where physicists, material engineers, electronic engineers, biologists and neuroscientists work together. 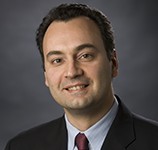 Malliaras graduated in Physics in 1991 from Aristotle University (Greece). After that, he entered the doctoral program in Mathematics and Physical Sciences at the University of Groningen, in the Netherlands. His thesis on photorefractivity in polymers earned him a distinction in the university (cum laude). After receiving his Doctoral degree, defended in 1995, he moved away to the United States. For two years, he held a postdoctoral fellowship at the IBM Almaden Research Center, to then become a Professor of the Department of Materials Science and Engineering at Cornell University, in New York. From 2006 to 2009, he worked as head of a national laboratory linked to the university, the Cornell NanoScale Science & Technology Facility.  In 2009, he founded the company Orthogonal, which operates in the field of organic electronics. In the same year, he returned to Europe as Professor of the Ecole Nationale Supérieure des Mines de Saint-Étienne, where he remains to this day.

Malliaras, whose h-index is 64, according to Google Scholar, has authored over 200 scientific papers, with more than 13,000 citations. His work with organic electronics and bioelectronics has received awards from the New York Academy of Sciences, U.S. National Science Foundation and the company DuPont, to name a few entities. He has given over 230 invited lectures and organized several events, for instance, the 2015 MRS Fall Meeting, in which he served as Meeting Chair.

He is a member of scientific boards in research centers in Germany, Ireland and Sweden. He is also an associate editor of Science Advances, an open access, peer-reviewed journal, released this year by the AAAS, which also publishes Science.

In his plenary talk at the XIV SBPMat Meeting, the scientist will address devices based on organic materials with electronic properties, bringing examples and opportunities.

What follows is a mini-interview with this plenary speaker of the XIV SBPMat Meeting.

SBPMat newsletter: – In your opinion, what are your most significant contributions in the field of organic electronics/bioelectronics? Please explain them, very briefly, and share references from the resulting articles or books, or comment if these studies have produced patents, products, spin-off companies etc.

George Malliaras: – In the field of organic electronics it would be the co-development, together with Chris Ober at Cornell University, of orthogonal lithography. This is a set of processes that allows the microscale patterning of organic films using photolithography, the golden standard in microelectronics. Orthogonal lithography relies on the use of fluorinated photoresists that do not damage organic films. It allows the microfabrication of devices, including high resolution displays, using standard equipment that already exists in industry. There is a company (Orthogonal, Inc.,www.orthogonalinc.com) that has commercialized the photoresists and is pursuing commercialization of this technology. In bioelectronics, the work is too recent and I would have to wait for the benefit of hindsight. A trend that was emerging when I joined the field involved a transition from the use of organic coatings to the use of organic devices. The latter undoubtedly offer more capabilities to the interface with biology. My group is contributing to this trend by demonstrating that organic electrochemical transistors bring several benefits as transducers of biological phenomena, such as large amplification which enables high quality recordings of brain activity.

SBPMat newsletter: – Which are, in your opinion, the main challenges for materials scientists and engineers about organic electronics interfacing with the brain?

George Malliaras: – To find the right collaborator who helps them formulate the right questions. I believe that embarking on an interdisciplinary field alone is a recipe for producing low impact work. The key to high impact work in this field is to formulate questions that are interesting to both neuroscientists and to us materials scientists and engineers. From our end, we need to be able to elaborate what are the advantages that organics offer and then figure out how to best employ them to address specific problems neuroscientists face. In my experience, it is often a combination of advantages (mixed conductivity, biocompatibility, “soft” mechanical properties) rather than a single one that gives the advantage to organics.

George Malliaras: – I often quote a statement by Tadahiro Sekimoto, former president of Nippon Electric Corporation: “those who dominate materials, dominate technology”. It highlights the importance of materials research in our world and shows the dangers of moving to a “service” economy.

Prof. George Malliaras´ bio and abstract of his plenary lecture.