Zinc oxide (ZnO) is a very common material in everyday life. It can be found in screws, sunscreen, catalyzer for methanol synthesis and sophisticated optoelectronic devices, such as computer flexible screens, to name just a few. However, in order to enable some promising applications, such as transistors and new devices, it is important to control electrical properties of this semiconductor material, which are related to specific defects in its atomic structure.

Within this context, three scientists from institutions in Germany and Brazil identified specific defects in zinc oxide films through an original approach, taking advantage of luminescence capability (emission of light not resulting from heat) of zinc oxide. Researchers prepared zinc oxide thin films with different types and amounts of specific defects. Systematically, scientists measured luminescence of each film and, thus, they managed to relate peaks on the measurements with various types of defects in crystal nets. The results of this study were published in periodical The Journal of Physical Chemistry Letters (JPCL).

In order to make the experiments, scientists used a scanning tunneling microscope (STM) in ultra high vacuum with a few peculiarities designed to generate luminescence, collect the emitted photons and obtain the measurements (spectrum) of luminescence. With this configuration, the STM is known as  photon-scanning tunneling microscope. According to Stavale, one of the main scientists in the field of development and application of this technique is Professor Niklas Nilius, correspondent author of the JPCL paper, with whom Stavale has directly worked for three years during his post-doctoral research at  Fritz-Haber Max-Planck Society, in Berlin, specifically at Physico-chemical Department led by Professor Hans-Joachim Freund, last author of the JPCL article. “The photon-scanning tunneling microscope has been employed in unprecedented manner to characterize metallic acids at the department directed by Professor Freund” – says Stavale. “The technique is still underused in Brazil and it is an essential part of the projects I develop with my research team at CBPF, situated in Rio de Janeiro” – he adds.

One of the most important features in photon-scanning tunneling microscopy is the use of electrons which are emitted by the tip of the STM to excite samples and, in the case of zinc oxide, to generate the desired luminescence. This phenomenon of emitting light generated by the impact of electrons over the material is called cathodoluminescence. 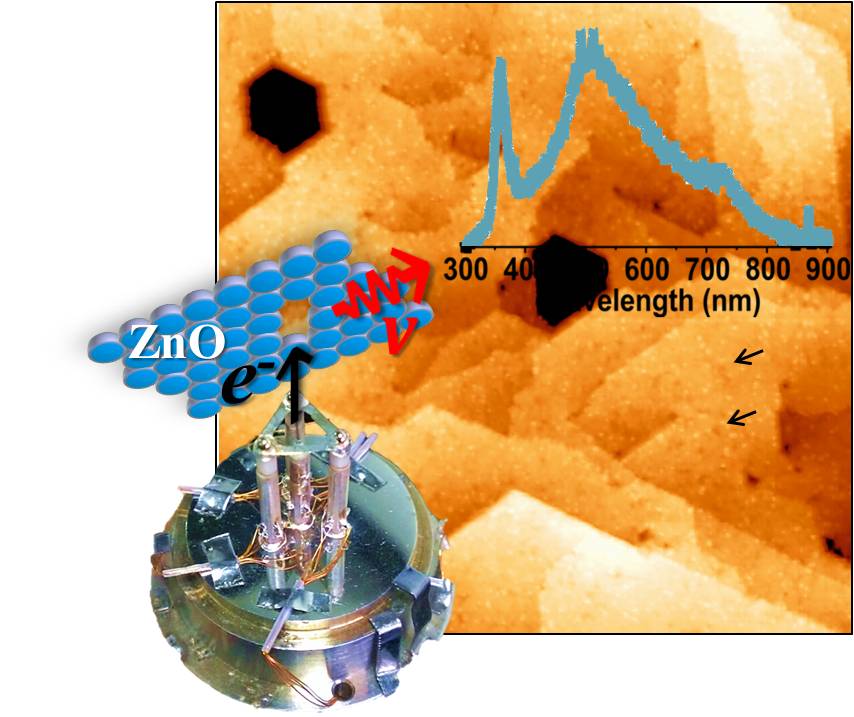 Experiment scheme in which the tip of the tunneling microscope can be observed, in the photo, exciting the zinc oxide film. The graph shows a spectrum of the oxide cathodoluminescence. At the back , the tunneling microscopy image of a zinc oxide film, with density of 20 layers (~5 nm) shows monoatomic steps and specific defects in the film’s surface. Vacancies of oxygen and zinc, specific defects, correspond to the areas indicated by arrows. The dark areas with hexagonal shape correspond to the areas where the film is noncontinuous, with depth of up to eight atomic layers.

This systematic work allowed scientists to infer that some peaks of luminescence of zinc oxide are due to defects such as vacancies of oxygen and zinc (dots in the lattice containing “vacancies”, instead of the expected oxygen and zinc atoms). “These specific defects are related to electrical properties often observed in zinc oxide, known as n-type doping” – Stavale adds.

The context of the work

The experiments of the JPCL article were conceived and conducted by Brazilian national Fernando Stavale in 2012, during his last year of post-doctoratal research with the group led by Professor Nilius, at Fritz-Haber of Max-Planck Society. Stavale joined the group in 2010 with financial support from Humboldt Institute in Germany. “For three years we have investigated for the first time the role of several dopants, such as chromium, europium and lithium in zinc and magnesium oxides, combined with ultra-thin films, raised in ultra-high vacuum with tunneling microscopy and local cathodoluminescence” – says Stavale about his post-doctoral studies.

The interpretation of results and the JPCL article redaction were performed in 2013 when Fernando Stavale became a CBPF researcher and Niklas Nilius became a Professor at University of Oldenburg, Germany.