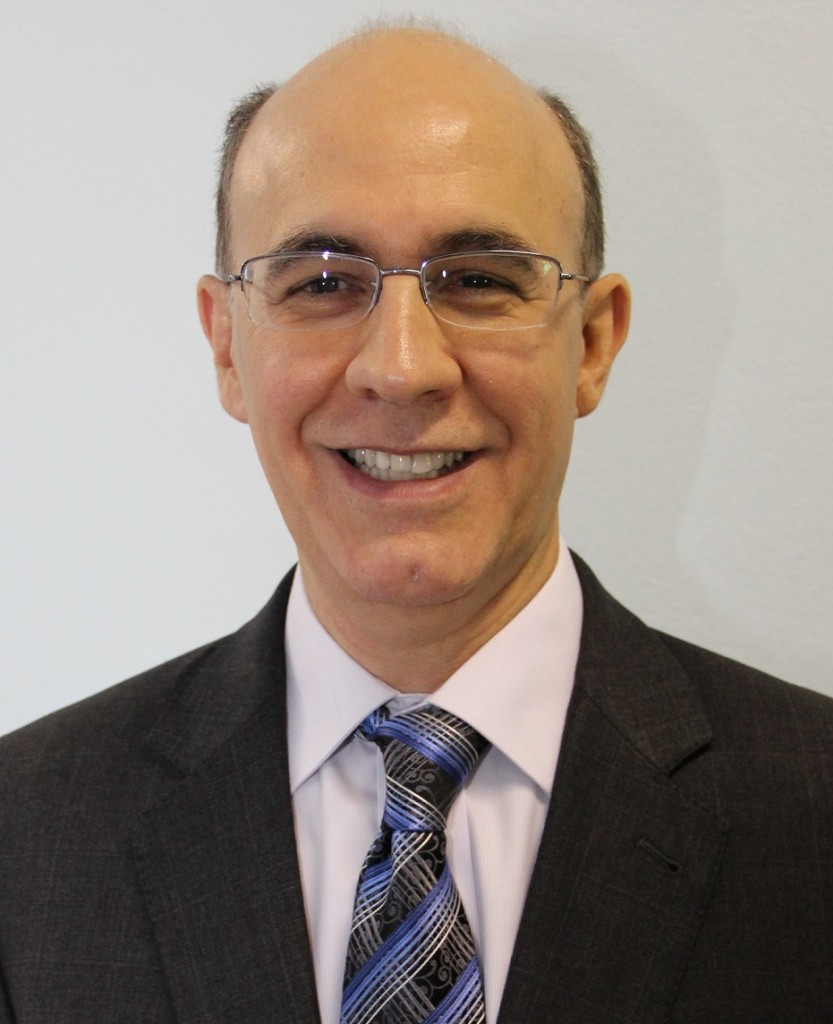 On January 29, 2016, in the city of Campinas (São Paulo State, Brazil), Osvaldo Novais de Oliveira Junior took office in the new executive board of the Brazilian Materials Research Society (SBPMat), acting as president. Novais is a professor of the São Carlos Institute of Physics (IFSC) at the University of São Paulo (USP). He has been a researcher in the field of Materials for 35 years, during which time he has published over 460 articles in indexed journals, 7 patents and 16 book chapters, among other publications. In total, the scientific production of professor Osvaldo has received, so far, over 8,500 citations according to Web of Science (index h=46) and 12,100 (h = 53) according to Google Scholar.

Osvaldo Novais de Oliveira Jr. was born on August 13, 1960 in Barretos, a city of the northern part of the State of São Paulo that, at that time, had approximately 60,000 inhabitants. When he was a teenager, he received the nickname of Chu, which accompanies him to this day, being also part of his professional electronic address.

He began his university studies in the Educational Foundation of Barretos. In 1980, while he was attending courses to obtain a teaching degree in Physics, he transferred to IFSC/USP to pursue a Bachelor degree in Physics, and started to work in research projects in the Electrets Group, nowadays referred to as Polymers Group “Bernhard Gross”. Within such group he began his master’s degree in 1983, supervised by professor Guilherme Fontes Leal Ferreira, obtaining in 1984 the title of Master in Applied Physics. In the following year he began to teach courses in the Bachelor Degree in Physics at USP São Carlos and continued developing research activities in the Polymers Group.

In 1986, he moved from São Carlos to the Welsh city of Bangor, United Kingdom, for doctoral degree studies in the University of Wales – nowadays Bangor University. In 1990, he obtained the title of Doctor in Electronic Engineering by defending his doctoral dissertation concerning electrical properties of Langmuir films, supervised by professor David Martin Taylor.

Back to Brazil in 1991, he added to his teaching activities at USP São Carlos, some classes in the graduation courses in Applied Physics. In 1993, he was named associate professor in that university.

In the same year, he conducted his first academic research works in natural language processing, an area that basically deals with problems related to automatic generation and understanding of texts by means of computers. Professor Osvaldo Novais was part of the team that founded the Interinstitutional Center for Computational Linguistics (NILC) and participated in the development of the first software for grammar revision of Brazilian Portuguese, which was named “ReGra”. The grammar checker was part of several versions of Microsoft Word processor as from 1999. From the work in NILC and scientific writing courses, he produced a book, together with more 7 authors, on scientific writing in English (“Writing Scientific Papers in English Successfully: Your Complete Roadmap”).

Osvaldo Novais was a visiting researcher in the University of Massachusetts Lowell (UMass Lowell), in the United States, between 2000 and 2001, and a visiting professor of University of Aveiro (Portugal) in 2006. Also in such year, he received Scopus Award, granted by Elsevier do Brasil and Capes (the Brazilian agency in charge of post-graduate programs), as one of the 16 Brazilian researchers with greatest scientific production, based on the number of publications, citations and supervisions (nowadays, there are 40 completed master theses and doctoral dissertations).

Nowadays, in addition to his activities as professor and researcher in IFSC-USP, Prof. Osvaldo Novais is a member of the coordination in Physics at FAPESP (the São Paulo research foundation), regional editor for South America of “Display and Imaging” scientific journal and associate editor of “Journal of Nanoscience and Nanotechnology”.

Here you find an interview with the researcher.

SBPMat Newsletter: – Tell us what made you become a researcher and work in the field of Materials.

Osvaldo Novais: – My professional choices almost always occurred without planning or specific motivation. I began the course for obtaining a teaching degree in Sciences in the Educational Foundation of Barretos, since I did not pass the entrance examination for being admitted in the Electronic Engineering graduation course, which I thought was the career I would like to have. After having decided to change area at the end of the first year and to do the entrance examinations for Philosophy and Psychology courses, for financial and personal reasons, I ended up continuing in the Sciences course and chose a teaching degree in Physics in the third year. There was a major transformation when I transferred to the Bachelor degree in Physics in USP São Carlos, and started participating in research projects. There I decided to become a teacher and researcher. My choice for the area of polymers was the result of a suggestion from a friend, who had great admiration for the faculty members of the Electrets Group at that time. Thus, I began doing research activities in such group, nowadays called Polymers Group “Bernhard Gross”, where I have been for 35 years.

Although I have not chosen a career or a research area due to a vocation or conviction, I was very fortunate because I consider the study of materials both fascinating and essential for society. Researchers in materials may amuse themselves with challenges and contribute to make this world a better place. Research training also allowed me to act in different areas, which is an important factor for those passionate for knowledge, as it is my case.

SBPMat Newsletter: – What are, in your own assessment, your main contributions to the field of Materials?

Osvaldo Novais: – I believe my greatest contribution was to have participated in the construction of a network of research in materials, mainly in nanostructured organic films. Such network nowadays comprehends researchers in many regions of Brazil,  and also includes international connections. Concerning specific scientific contributions, I could possibly point out the study of electrical properties of Langmuir films, as well as the use of such films as cell membrane models. It could also be worth to point out sensors (such as electronic languages) and biosensors produced with nanostructured films, noting that the main actors of such contributions have been students and doctoral candidates of my research group.

SBPMat Newsletter: – In parallel to your performance in Materials research, you develop studies concerning natural language processing within NILC, center of which you are founding member. Tell us a little bit about this activity.

Osvaldo Novais: – Out of need, I ended up becoming interested in scientific writing in English, in a work that was, at first, informal and that resulted in projects of software tools for writing aid. Being invited to participate in the team that developed the first grammar checker for Portuguese in the 1990s, NILC was created, which to this date is a reference worldwide for Portuguese language automatic processing. I say that without any embarrassment whatsoever, since all merits for this achievement go to a team of computer scientists and linguists, of several universities of Brazil, who have been conducting research and development of the highest level for years. My participation was merely important in the beginning.

For two decades, my research in natural language processing with NILC was fully disconnected from Physics, but in the last years we have used statistical physics methodologies for text treatment. With the new research paradigm based on intensive use of data (called “Big Data”), now there is the possibility of combining nanotechnology – an area that is predominantly of materials – with natural language processing and artificial intelligence, for example, in the diagnosis systems supported by computer. This is a fascinating topic that allows exercising technological convergence, which will boost research and development in the 21st century.

SBPMat Newsletter: – Briefly tell us what are your plans for SBPMat while president of the society within 2016-2018.

Osvaldo Novais: – I believe that the most relevant plan is to continue the excellent work that the previous executive boards have carried out, which made SBPMat be one of the most powerful scientific societies in Brazil. That includes keeping the excellent level of our annual meetings and strengthening the international insertion that it has achieved. Other goals of the new executive board are: to increase the interaction of materials researchers with the industries installed in Brazil, to encourage the participation of young researchers in the society and to promote scientific and technological popularization programs, emphasizing the key role of research in materials for technological and social development.

SBPMat Newsletter: – We always invite the interviewees of this newsletter section to leave a message for the readers who are beginning their scientific careers. Would you like to say something in particular for the future/ junior scientists?

Osvaldo Novais: – My message is: apply yourself and strive towards obtaining strong scientific training, focusing on languages of knowledge, whatever the natural languages (in our case, Portuguese and English) and languages of mathematical formalisms. Such strong training will allow you to continuously learn, which is essential in an ever-changing society. May you follow your dreams by solving scientific and technological problems, which is one of the most amusing and refreshing activities.