In June 1933, the physicist and engineer from Sttutgart, Germany, Bernhard Gross disembarked in the city of Rio de Janeiro.  After developing some research on cosmic rays as a collaborator and coming to the conclusion that it was hard to find a job as a physicist in his country, the 28 year-old man decided to try a life in Brazil. At this point, Gross had already published a few scientific articles.

Why did Gross come to Brazil, a country that had very few institutions, infrastructure and human resources for research at the time? At an interview conducted in 1976, Gross said that his interest in Brazil started in his childhood, during a trip with the family to the cities of Rio de Janeiro, São Paulo, Porto Alegre and Pelotas, in which he had a taste of adventure and romance.

Right after his arrival in Rio, Gross spoke at a few lectures about cosmic rays at Escola Politécnica do Largo de São Francisco and, thus, he started to meet people connected to science in the city.  In January 1934, he got his first job at the Institute of Meteorology. That same year, he published the first of many scientific articles written in Brazil. In 1999, at the age of 94, he would publish the last of around 200 articles.

Gross made internationally relevant and impressive contributions in various topics, such as Gama rays, electrical circuits and dielectric materials, with research developed in Brazil. Gross addressed scientific challenges with a lot of competence, from both the theoretical and the experimental point of view, and he gave specific attention to the application of Maths in Physics.

Besides doing science according to international standards, since the 30’s and 40’s, Gross published the results of his work in scientific journals in Brazil and abroad, such as the Annals of the Brazilian Academy of Science, the Journal of Applied Physics, Physical Review, Journal of Chemical Physics and the German magazine Zeitschrift für Angewandte Physik, among others.  In addition, Gross traveled a lot around the world, spending some time working in the United States (at Bell labs and the Massachusetts Institute of Technology), in England (at Electrical Research Association), in Austria (as a member of the scientific committee for the International Agency of Atomic Energy, international organization dedicated to the pacific use of atomic energy), among other destinations. Finally, Gross managed to bring to Brazil researchers from abroad in many occasions.

By continuously working in various themes, Gross started in Brazil the research on Physics of Condensed Matter, the pillar of Materials Science and Engineering, in a pioneering way. 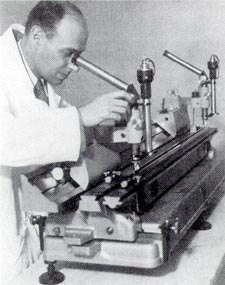 One of the fields that received more scientific contributions from Bernhard Gross is the study of electrets, dielectric materials (insulators), which possess permanent electrical charge for being permanently polarized.

The genesis of Gross’s research about electrets refers to work produced by him in Brazil in 1934: a request from Light, the electricity and telephone company, who wanted to know which was the resistance of the isolation on their telephone cables. By making measures, Gross realized that the cables presented a phenomenon which had fascinated him for some time, called “dielectric absorption”.

In the interview of 1976, Gross reports: “What Light wished to know I could resolve within a reasonable amount of time. Now, I took the opportunity to study the behavior of insulators, in a more basic way.” Gross saw the technological interest in research activities as very important, without this limiting the scientific curiosity to a mere resolution of technological issue.

In the early 40’s, Gross and his team still researched on dielectric materials at the National Institute of Technology (INT) in Rio de Janeiro. Bernhard Gross had read about electrets and, due to sheer curiosity, he started to make a series of measures together with French researcher Line Ferreira-Denard, who worked at INT. The experimental work originated two initial publications in 1945 and in 1948, and it allowed them to explain for the first time the behavior of electrets. In 1957, Gross conducted a systematic study about the behavior of fields that were generated when, while injecting electrons in charged solids, electrons were stuck in “traps”.

It was also within the context of dielectrics and electrets that Joaquim da Costa Ribeiro developed the comprehension of the thermodynamic effect or “Costa Ribeiro effect”, in which a dielectric acquired permanent polarization and charge by means of the application of an external electical field.

The knowledge developed by Gross about electrets enabled the advancement on industrial applications of this material, from which the most commonly known is the electret microphone, created inside Bell labs by  Gerhard Sessler and James West, who applied for  patent of the invention in 1962. Millions or billions of units of this kind of microphone have been produced per year.

In order to get to the electret microphone, Sessler and West used the theory developed by Gross and a method described by him to charge materials through electron beams. But researchers at Bell lab used as raw material Teflon leaves, whose mechanical properties, low conductivity and opportunity to be manufactured as thin plates allowed the application on microphones. A charged thin leaf of Teflon is moved by the action of sound vibrations and it induces electical charges, transforming sound vibrations into electrical vibrations.

“I admit that at the time I did not think of practical applications”, said Gross during the 1976 interview about the research on electrets. The scientist explained the reasons: he did not have adequate material for industrial application (he used carnauba wax and plexiglass); the difficulty in applying for patent at the time was too great and he needed to gather various skills in order to reach a device as a microphone.

The Sessler microphone was not the only one based on the knowledge developed by Gross. In the history of the Sttutgart physicist and his electrets, there was a case of direct technological exchange, related to Preston Murphy, his American assistant specialized in electrostatic. Gross met him in one of his travels and managed to get him a contract to work in Rio de Janeiro for the National Committee of Nuclear Energy. Murphy went to Brazil around 1957 and stayed for about six years, in which he gained knowledge and expertise.  According to Gross, “when coming back to the US, I joined a company where he developed a kind of electrect microphone, based on the knowledge he acquired here, taking advantage of the American extraordinary capability to make gadgets, a virtue I do not possess. He arranged a few contracts there and assembled a big production line of electret microphones”.

Acknowledging the contribution of Gross in electrets

The advancement promoted by Gross in research on electrets was recognized worldwide. Gerhard Sessler dedicated the book “Electrets”, initially edited by him in 1980, to Bernhard Gross. In an article published in the Brazilian Journal of Physics in 1999, Sessler states that Gross laid the cornerstones of modern research on electrets, guided its evolution for over a century and helped establish the field as a respected subject of modern science.

In addition, international events of the field also honored the German physicist, like the 3rd and 5th International Symposium on Electrets, occurring respectively in São Carlos (Brazil) and Heidelberg (Germany) for Gross’s 70th and 80th birthday.

In Brazil, many scientists graduated under his influence. Among others, we can name Armando Dias Tavares, Francisco Oliveira Castro, Guilherme Leal Ferreira, Joaquim Costa Ribeiro, Plínio Sussekind Rocha, Roberto Faria, Sérgio Mascarenhas and Yvonne Mascarenhas. Research groups were inspired by Gross, especially in Rio de Janeiro and São Carlos, such as Grupo de Polímeros “Bernhard Gross“, created in the middle of the 70’s at USP São Carlos, from visits of Gross to the university.

Gerhard M. Sessler. Bernhard Gross and Electret Research: His Contributions, our Collaboration, and what Followed. IEEE Transactions on Dielectrics and Electrical Insulation    Vol. 13, No. 5, October 2006.