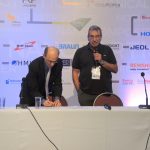 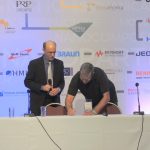 A cooperation agreement signed by B-MRS (SBPMat) and the European Materials Research Society (E-MRS) promotes scientific collaboration between researchers from Brazil and Europe and in particular encourages the participation of SBPMat members at E-MRS events and E-MRS members at SBPMat meetings.

“According to the agreement, SBPMat members can be organizers of symposiums at E-MRS Meeting, a prestigious responsibility for any researcher, and financial incentive will be granted,” explains Professor Osvaldo Novais de Oliveira Junior, president of SBPMat. “Furthermore, students and postdoctoral fellows, members of SBPMat, can compete every year for support to present their work at the E-MRS Meeting in Europe,” he adds.

The agreement was signed in Campinas (SP) on October 29, 2016, during the closing ceremony of the XV SBPMat Meeting, by the president of SBPMat and Professor Rodrigo Martins, who represented the European society as a former president.