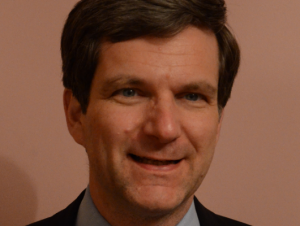 Ifor Samuel: – There have been two main themes to my research. One is understanding organic semiconductors with the aim of using that understanding to improve them.  In this direction, I have studied the light emission process in conjugated polymers which is very important for organic light-emitting diodes (OLEDs) [1,2], developed as a new class of OLED material (with P.L. Burn) [3], and measured exciton diffusion which is very important in polymer solar cells [4].

Ifor Samuel: – The majority of my patents are licensed to companies that are developing them.  There are several patents relating to light-emitting dendrimers as highly efficient solution-processed OLED materials.  These were initially licensed to Opsys Ltd in Oxford, who were later acquired by Cambridge Display Technology, who in turn are now wholly owned by Sumitomo Chemical and incorporate aspects of the technology in their products.  For the skin cancer treatment, the patents were licensed to the spin-out company Ambicare Health Ltd.  Ambicare have brought two related products to market – one is a wearable red light source for skin cancer treatment, and the other is a wearable blue light source for acne treatment.

Ifor Samuel: – The advantages of organic semiconductors come from how they combine novel semiconducting optoelectronic properties with simple fabrication and the scope to tune properties by changing their structure.  An existing organic semiconductor device is an OLED mobile phone display or television.  They give very vivid images, together with outstanding contrast and viewing angle.  However, in contrast to inorganic semiconductors which are rigid and brittle, organic semiconductors can be used to make flexible devices – such as light-emitting bandages for medicine.  The flexibility has not yet been fully exploited, but also simplifies manufacture which could be by simple roll to roll processes.  This would be an excellent way to make solar cells in Brazil.  The laser explosive sensors are completely different from inorganic lasers because the explosive vapour binds to the gain medium and modifies its light emission.

Ifor Samuel: – I have really enjoyed my previous visits to the Brazil MRS meeting and look forward to visiting Campinas.  Do come to my lecture to hear about the remarkable world of organic semiconductors and their applications.