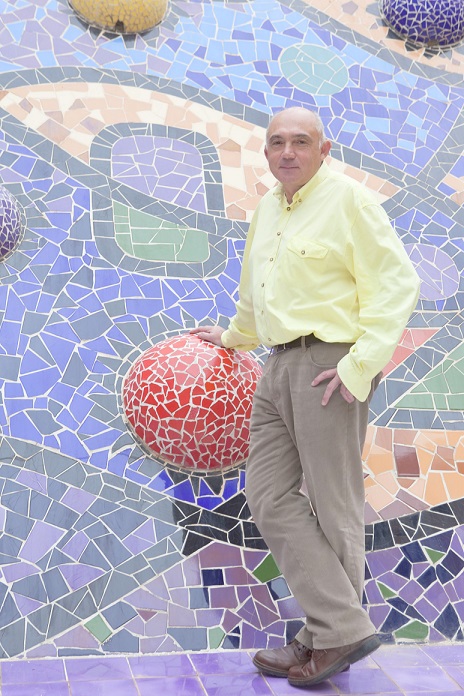 The combined use of theory and experiment is indispensable in modern nanoscience and nanotechnology. Frequently, theoretical, computational and experimental approaches are complementary in the understanding of structures and processes at the atomic level. Besides that, qualitative theories, high-level calculations and experimental techniques form a virtous cycle of knowledge generation in which advances in one of the approaches create new challenges for the others.

In his plenary lecture at the XII SBPMat Meeting, Professor Juan Manuel Andrés Bort (Universitat Jaume I, Spain) will present an overview of the results he obtained by combining theory and experimental work in the study of multifunctional metal oxides at the atomic level.

Professor Juan Andrés holds a Bachelor degree and a PhD in chemistry, both from University of Valencia (Spain). In 1984 he became full-time lecturer of that university. After that, he joined the Universitat Jaume I, where he holds a professorship in the area of physical chemistry since 1994 and is the director of the Laboratory of Theoretical and Computational Chemistry. He has been visiting professor at the Uppsala University (Sweden), the Pierre et Marie Curie University (France) and the Federal University of São Paulo at São Carlos (Brazil). Juan Andrés has published more than 330 scientific papers so far, with more than 6.000 citations, and 15 text books. He has given 25 invited talks in international meetings.

SBPMat: – What are the main challenges you have faced in understanding the behaviour of multifunctional metal oxides within this “theory + experiment” approach?

Juan Andrés (J.A.):  – Theory and simulation can provide fundamental understanding of observed phenomena, and can be used to make predictions for systems that are difficult or impossible to study experimentally or behavior at very high temperature or pressure. In addition, theory and simulation can give detailed molecular level information that is difficult or impossible to determine from laboratory experiments. These methods also find important applications in determining the limits of well known macroscopic laws, which may break down for nanoscale systems.

Theory and experiment each have different strengths and limitations, but these are complementary to a large extent and there is much to be gained by constructing research programs that combine the two. For instance, the idea of the design of new materials such as multifunctional metal oxides, including nanostructures, with targeted chemical/physical properties has been attracting a lot of attention, especially because of potential industrial payoffs.

SBPMat: – In your opinion, what are the main challenges that science has to overcame yet for a better comprehension of the behaviour of these materials at the atomic level?

J.A.: – As scientiﬁc and chemical research becomes more complex and interdisciplinary, it becomes ever more challenging to communicate and explain the state of the art, new results and advances. In this context, the attitude adopted in the recent Nature Chemistry journal (vol. 1, April 2009) on the future of Chemistry is opened to be capable to show the deepest existential meanings in order to predict the future progress of this field. In particular, the note entitled: “Experiment and Theory in Harmony” (Nature Chemistry, 1, 8 (2009) by Mark A. Johnson at Yale University). This author discusses how the two sides of physical chemistry have necessarily developed together, and looks at how their synergy dictates the direction of contemporary research.

Physics-based simulations complement experiments in building, in a molecular-level, the understanding of chemistry: they can test hypothesis and interpret and analyse experimental data in terms of interactions at the atomic level. However, the connection among theory, simulations and experimental results are not always obvious, as the languages of these disciplines are different. This recognition motivated us to create a bridge between computational chemistry and experiment in a manner that will allow efficient exploitation of these approaches.

In this respect, the recent work of Chemistry Nobel prize: “Interaction between Experiments, Analytical Theories, and Computation” R. A. Marcus, J. Phys. Chem. C 2009, 113, 14598–14608/. In particular the following sentences of this paper can be remarked: “We all recognize that one of the main goals in research is to capture the physical essence of a phenomenon and use it not only to interpret but also to predict the results of new experiments. One view of theory, demonstrated in the present article, is that experiments are primary, often the source of new theory, and that the interaction of theory and experiment is paramount, each stimulating the other”. “Nevertheless, discerning basic theoretical problems in the wealth of available experimental and computational results can be a major hurdle and sometimes the development of the theory can be relatively rapid once the existence of an experimental puzzle is known. The writer continues to be impressed with this exciting interplay of experiment and theory and with many experimental puzzles that exist and that continue to arise in new experiments, when one keeps an eye out for them. For the theoretically oriented students it is perhaps a truism to add that the broader one’s background is in physics, chemistry and mathematics, and the more one is familiar with the new results and the potential and limitations of new techniques, the larger the range of interesting problems that one can address”.

SBPMat: – Modern experimental techniques, theoretical analysis, high-level calculation. According to your experience, is it good/ possible to gather all the necessary expertises and resources in your own research group or it´s better/ more feasible to collaborate with experts from other laboratories?

J.A.: – Predicting the physical/chemical properties of complex systems using first principle quantum mechanical approaches at microscopic level can be considered as the Holy Grail of theoretical and/or computational methods. Applied quantum mechanics holds a central position as a key technique that contributes to all aspects of chemistry, physics, biology, material science as well as nanoscience. The last few years have seen the continued development of methodology, computer hardware and algorithms that have resulted in an ever expanding range of complex systems and properties that are amenable to calculation.

One of the most remarkable successes of the present project will be to demonstrate that the improvements, developments of the methods and techniques of theoretical and computational chemistry (TCC), are now mature enough to model chemical and physical properties with good accuracy. Consequently experiments evolve to computational experiments, and theoretical calculations evolve to applied TCC, which can also be considered as computational experiments. At the outset of the 21st century, TCC has arrived at a position of central importance not only for theorists but also in the laboratories of most experimentalists and in many disciplines.

In the last years, new computational techniques and methods have been developed with successful and robust results in this field of study that has progressed to the point of being able to address important questions in the core areas of the chemical sciences, including questions lying on the interface among chemistry, physics, biology, and engineering. These interdisciplinary areas include biomolecular chemistry and the chemistry of materials. While the results obtained traditionally complement the information obtained by chemical experiments, it can, in many cases, predict not observed chemical phenomena.

In this respect, the methods and techniques of TCC have evolved into an important tool in almost all areas of chemistry and, as it were recently remarked by Truhlar /Truhlar, D. G. J. Am. Chem. Soc. 2008, 130, 16824./, “computations on complex systems are the current frontier of theoretical chemistry”. However, there is still a lot of work to do. As a matter of fact, modeling at the electronic level of systems with high configurational complexity is still challenging. In this case, the main problem is either practical and conceptual as the different observables to be modeled depend on processes occurring at different length, energy, and time scales. Computational tools typically employed for systems of such dimensions are classical simulations which, however, produce reliable results as far as transitions in quantum degrees of freedom do not take place. On the other hand, when the observables of interest explicitly involve quantum degrees of freedom, e.g., chemical reactions or spectral transitions, their modeling should be derived from statistical averages of genuine quantum states interacting with fluctuating perturbing environments. In the past years, our research group has been focusing its efforts in this direction, collaborating with experts from other laboratories, producing a theoretical-computational methodology whose main feature is to describe at electronic level a portion of a large molecular system maintaining the complexity of the overall system. Several applications, ranging from spectroscopic properties to chemical reactions, have been witnessing the rather good performance of the method.

Keeping in mind the objectives and topics that the lecture is going to cover, together with the collaborations with national and international research groups, including theoreticians and experimentalists, as well as the complementarities of the teams will allow us to improve, develop and complete some of the methods and techniques of TCC, in order to be applied in these research lines of outstanding interest.

SBPMat: – Feel free to leave any other comments about your plenary lecture to our readers.

J.A.: – The overall objective of the plenary lecture lies in taking advantage of the ability and experience in the use of the methods and techniques of TCC in order to carry out studies on structure, properties and chemical reactivity in micro- and nano-materials. Quantum mechanical calculations based on realistic model systems are changing the science of nanotechnology. These molecular simulations and modelling provide detailed, atomic-level insight into the fundamental mechanisms of nanomaterials, as well as practical applications to understand experimental data. For this purposes, new computational algorithms, theories and protocols will be developed, implemented and applied. Such advances will be exploited in designing new materials with properties suitable for use in a wide range of applications ranging from biomedicine to nanocatalysis, and this talk based on recent results obtained along the develop of the research project maintained with collaboration with “Centro Multidisciplinar para o Desenvolvimento de Materiais Cerâmicos (CMDMC). The groups at CMDMC involved in the project have a long experience of competitive scientific work with national and international collaborations. They try to promote basic and oriented research a of high scientific quality, almost in the frontier of knowledge, contributing to the development of new methods and techniques and the adjustment of the already ones to study relevant problems in the field of materials science and nanotechnology. We consider this project is in the current frontier of a multidisciplinary research where chemistry, physics, biology, materials science and the emerging field of nanotechnology converge.

See the abstract of Juan Andrés plenary lecture “Connecting theory with experiment: A survey to understand the behaviour of multifunctional metal oxides”.